The 5 Best Looking NBA Jerseys of All Time


The 5 Best Looking NBA Jerseys of All Time From the absurd and nearly blinding to the simple, timeless and classic, over the years NBA fans have seen a vast array of basketball uniforms. Superstars, role players and bench warmers have all suited up in jerseys representing the good, the bad and the ugly. Here are our all time top five. 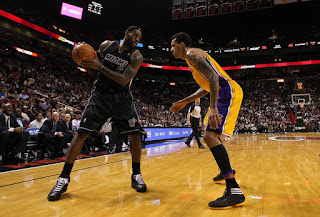 Any hardcore hoops fan of the past few decades remembers images of a young Michael Jordan (with hair, even) skying through the air in this red jersey with Chicago splashed across the ches
t in slick cursive writing. Though Jordan, Pippen and a strong supporting cast would win six titles in updated jerseys throughout the 90s, the staying power of this seminal retro design cannot be denied, as the Bulls still suit up in this classic design from time to time.

These short-lived Hawks jerseys featured a swirling green and blue design, far removed from the intimidating red and black that has represented the team for decades. By far, the most common throwback jersey to be spotted from this era is this the Pistol Pete Maravich, complete with "Pistol" in quotation marks on the back in lieu of the traditional last name above the number 44. The flare and legacy of Maravich's stylish game is solely responsible for the popularity of this unique design.

Although this design changed slightly during the mid 1980s, the loud and kaleidoscopic array of colours stuck around. Denver legends like Alex English, Kiki Vandeweghe and even a young Dikembe Mutombo famously sported these classic jerseys. The design remains a prominent choice can still be spotted on hats, shirts and jerseys all over the world today.

No rundown of the NBA's all time best jerseys would be complete without a nod to the purple and gold of the L.A. Lakers. This franchise has proved over the years that you don't mess with tradition by keeping the jersey design simple, classic and elegant. From Jerry West and Kareem to Magic, Shaq and Kobe, the Lakers jersey represents not just winning, but winning with style, grace and swagger.

Finally, our top spot goes to another franchise that respects tradition over fashion trends. Owning 17 NBA titles, which is one more than the Lakers, Boston proves that good luck comes to those who remain loyal by sticking with the green and white Irish-infused design over a half-century of winning and success. Russell, Cousy, Bird, McHale, Garnett and Pierce have all rocked the classic colors all the way to the championship parade. The Celtics know to how to look good and win, which places the storied franchise at the top of our list.

Though the argument may be made for a lot of jerseys, the answer often also comes down to the story of the players who suited up in the jersey and what they did to represent the team. In the end, style can carry a man most of the way, but it's up to him to finish the job.
Posted by admin at 10:42 PM