Alfred Hitchcock’s “Psycho” Has a Worth Prequel

The relationship between the 17-year old adolescent Norman Bates (Freddie Highmore) and his mother, Norma (Vera Farmiga) is explored in series “Bates Motel”, a ten-episode prequel to the 1960’s Psycho (Alfred Hitchcock). The series presents the factors that lead to the shaping of the personality of Norman. Recently, a second season began filming, programmed to be released in 2014, due to positive chronicles received from American viewers. You can watch the first season with charter cable offer. 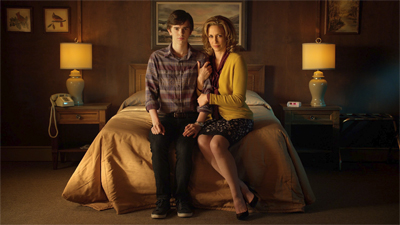 The story takes place in a fictional city, White Pine Bay, Oregon, different from the action of the movie Psycho which was placed Fairvale, California. The series begins after the death of Norman’s husband. The woman and her young child, Norman, leave to start a new life in the White Pine Bay, where Norma bought a motel with the insurance money she received after her husband’s death. But they are confronted with many problems in the new small town.

The show is not a roller coaster of suspense, but a series of events of lesser or greater severity to which the teenager is exposed prints into his subconscious and affects him in a way that the viewer could never anticipate in Psycho. His apparent mental balance gives no clue to his evolution, so the end of the first season will very much surprise the audience.

The filmmakers create a diversion, drawing attention to Norma, a possessive mother, yet not bordering pathology, with an aura of mystery that remains until the end. Vera Farmiga doesn’t overplaying, meaning that she acts as if she were firmly convinced that her character is of sound mind and she is entitled to control her son's life. No tics or mannerisms, she is the portrait of the contemporary woman who needs to raise her son alone. Even an extremely violent reaction is placed in the accurate context, so the spectator overlooks it (even if we remain suspicious about Norma Bates).

Psycho Norman needed a revival in the eyes of the audience, and this prequel in ten episodes offers just that. Actor Freddie Highmore is the show’s big surprise. The face of a young introverted character, clumsy, shy, but charismatic.

What bothers is that writers have exaggerated with words that are not supposed to be said by characters, but understood by the audience. Writers abuse replicas as “What's wrong with me?” (Norman asks), “You're special!” (says Emma Decody), “ I should not have gotten involved with someone like you” (says Nicola, the one that Norman is having an affair with).

Spectators who like the mystery genre will see murder, corrupt cops, detective, cases of human trafficking and a subplot about drugs. If Alfred Hitchcock created suspense without showing stab wounds (we see bleeding, but we do not see the knife entering the flesh), “Bates Motel” does not spare the viewer. The motel and the Colonial house behind it, where Norma and Norman Bates live are actual replicas from Psycho.
The series was developed by Carlton Cuse (executive producer of “Lost”), Kerry Ehrin (“Friday Night Lights”) and Anthony Cipriano, the characters being inspired by the novel Psycho (1959) written by Robert Bloch.
Posted by admin at 6:18 PM

Email ThisBlogThis!Share to TwitterShare to FacebookShare to Pinterest
Labels: Movie